His name is Luis Manuel Vázquez Rosas and he has a small taqueria in Boca del Río in Veracruz that if you look at it from the outside, it is actually not very different from the thousands of taco shops in Mexico. However, Uncle Take’s business, as it has been affectionately baptized on social media, has been featured in renowned publications such as TIME and has gone viral beyond the borders of Mexico.

The history of Takesabroso began nine years ago when its founder Don Luis decided to start a taqueria with just three tables and an employee to help him.

“For more than seven years our taqueria had nothing of relevance, nothing. Not 800 pesos for sale; We only had five tables of Coca-Cola ”, Don Luis spoke with us, who insisted that we call him Uncle Take . “One day three years ago one of the guys who worked with me decided to open a Facebook page and we started putting up a promotion every week with a product. That gave some notoriety with the students around ”. 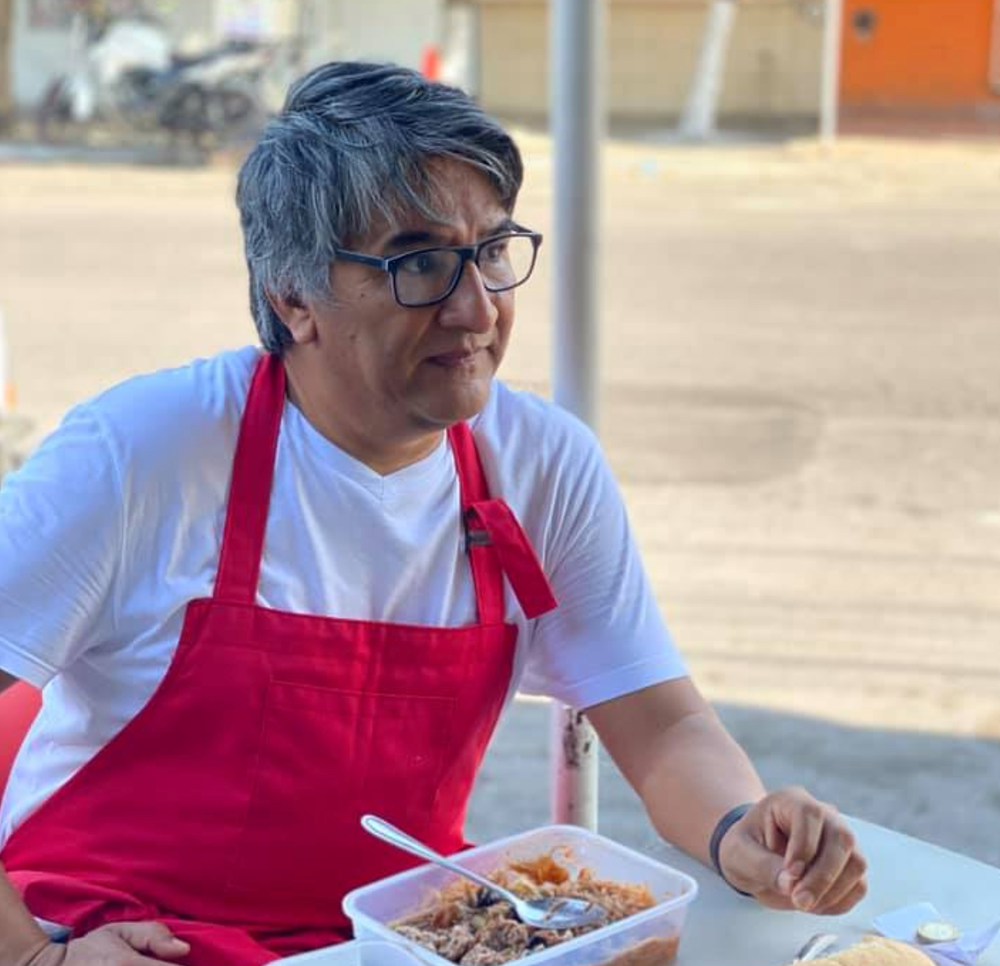 Everything changed in May 2019 when a group of those young people who were eating tacos at the place came up with the idea of making a video of the taqueria.

“I told them that I wanted to show how the tacos were prepared, but they answered me that those ‘were slobbery'”, laughs the entrepreneur when remembering the moment.

In that group of young people was Jorge Lajud , a young man who decided to edit a video using footage from Avengers: Endgame to advertise the place.

What happened with that video no one could dream of. The curious commercial, which shows Thanos – the great villain of the Marvel Cinematic Universe (MCU) -, clicking with the Infinity Stones and then starting to dance with some taquitos in the background, became immensely viral.

this is a real ad that a real restaurant in mexico made pic.twitter.com/WFCpy4WVcr

The tweet that released the video has had more than 149 thousand retweets and 3.9 thousand responses since the moment of its publication in August 2010, which led the digital version of TIME to highlight the use of the scene from Avengers: Endgame To make publicity.

“I was sleeping and these young people woke me up with calls and calls because the video had gone viral. I didn’t believe them because, since they always teased me, I thought this was another joke, ”Uncle Take commented.

The growth of the video was so spontaneous that Don Luis and the boys were scared because they began to receive calls from newspapers in the United States to ask us if we had the rights and they came to think that Marvel was going to sue them. However, the impact of the announcement on social networks was such that many tourists who were in Veracruz began to go to the taqueria to take photos in the place.

“We were in for a fright! I did not know how to act and I came to hide at my house. The guys called me because people asked about me, but I didn’t want to go. Not know what to do”.

It was thus that Takesabroso began to make video “badly made” with implausible premises that his followers really liked. Currently the taquería’s fan page on Facebook has more than 80 thousand five hundred followers from all over the world.

Don Luis never expected that welcome. The support in networks has been such that, thanks to this publicity and home orders, in his own words, the contingency due to COVID-19 has not affected the sales of the premises.

“It is not a large taqueria, we can seat a maximum of 60 people, but thanks to the fact that these ‘kids’ do not stop advertising, we are in black numbers”, recognizes Uncle Take.

His second video, where a dealer somewhat similar to Sonic, also from Lajud, fights in a dance duel with a “coronavirus” (and beats him) has more than 3.1 million views and 19 thousand comments. I mean, the kind of interaction that many big brands can only dream of.

The art of doing something so bad, that it is good

It is difficult to emphasize what the true charm of the Takesabroso videos is. The editing is crude, the animations somewhat crude and the premises quite implausible. Yet it is precisely this combination of elements that has made it so absurdly popular.

“Everything is done with an iPhone. There is no sophisticated camera, it’s just me and the young man who now does everything on the social networks of the brand called José Antonio Elizondo. He only records with his iPhone camera. It takes us no more than 15 minutes to record everything, ”says Uncle Take.

Actually, there may be an explanation. There is a term called shitposting ( shit , “shit” and posting , “publish”) that is based on uploading content of poor quality and sarcastic to attract attention or divert the course of an online discussion. They are such bad content, that they are very good. They are so detached from conventional norms of what we typically consider “good” that they connect on a less rational, but more sentimental level. In other words, videos like Takesabroso’s don’t make sense, but they do make you laugh.

“We never imagined that impact. Antonio is not even studying marketing; he is preparing to be a merchant marine at the Nautical School. I have told him that I want to buy him a marketing course, but he refuses, ”Don Luis remarks.

The day everything changed for Uncle Take was when Antonio decided to do a broadcast called Sleeping Takesadilla, where it was literally a Facebook Live of a quesadilla. Nothing more. No animations or anything.

“I started receiving calls to congratulate myself on the broadcast we were doing and I didn’t know anything. I went to Antonio’s house and he just told me ‘Don’t make noise, it’s being recorded’ ”, says Don Luis, who remembers that he panicked when he saw that 500 people had gathered to watch the live video. “I would tell him ‘Cut it now, cut it now!’ and he refused because he assured that more people would arrive ”.

In the end, the video of the Sleeping Takesadilla had a reach of 7 million and the next day influencers and local newspapers from Boca del Río were talking about the transmission. 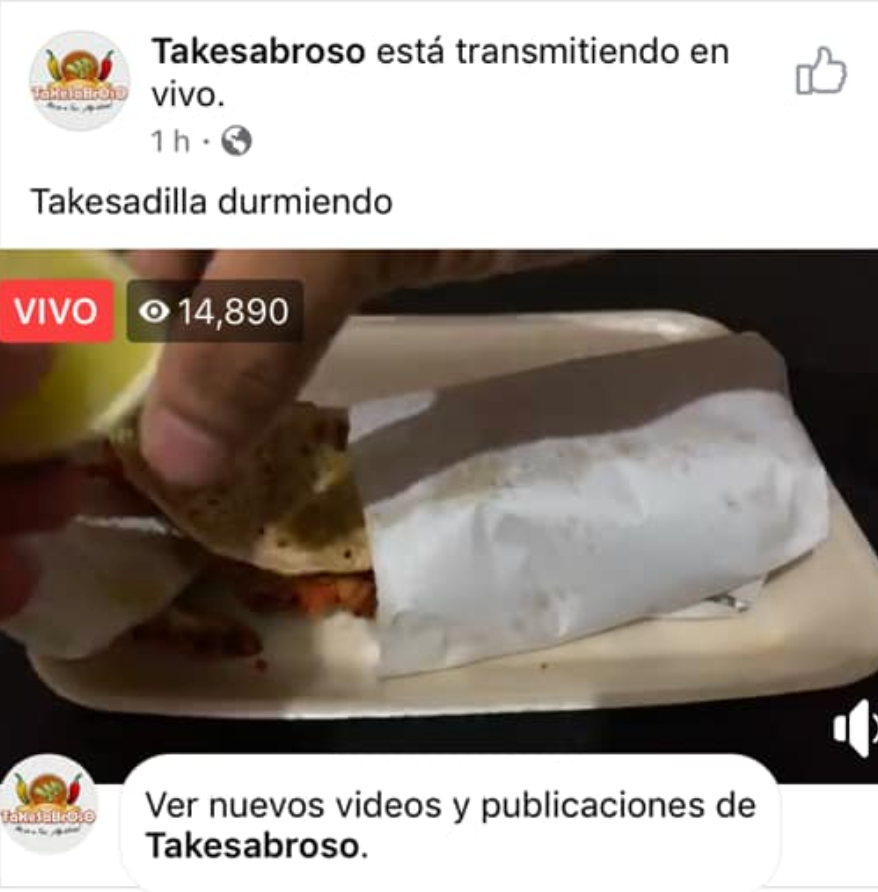 From that day on, Don Luis completely handed over the brand’s social networks to Antonio.

The importance of being Uncle Take

The Takesabroso community has grown so much that the brand’s followers have baptized Don Luis as Uncle Take, a nickname that has changed the life of the entrepreneur. People stop him in the street and ask for photographs and the local children recognize him.

“I feel with a very big commitment. Ever since I leave home I think ‘people see me as Uncle Take, I must be a good Uncle Take’. That’s changing my mind and it really makes me a little nervous because sometimes I don’t know what to do. It is a commitment that involves everything in the business because it carries a very high expectation ”.

Don Luis’s fear is not unfounded. Being a brand that has gone so viral, one mistake could have a terrifyingly big impact.

“Thank God, like any restaurant business we can make mistakes. So far we have received two complaints, but people tell us ‘Man, we understand you’. Those details are what drive me crazy. That is the level of commitment in which my employees and I are involved ”.

Now the entrepreneur has just bought a trailer to extend the service of his brand in different locations and raise funds to get to Mexico City and specialize, since he calls the town the “Harvard of Tacos.”

The biggest lesson: listening to the young

The moral of the story of this curious SME seems to be very clear: you have to listen to your employees and let people do what they do best.

I don’t do things alone. For example, I don’t know how to be a barbecue. I have to recognize my limitations and understand what my employees can bring me. That really many of them have so much to teach me that it is better to shut up and listen to them. I prefer to create that type of work structure ”, says the famous taquero.

This is not something that Don Luis learned in school, but rather the experience of going bankrupt six different businesses has left him.

“I ended up running out of 10 pesos to have a coffee for being stupid, for wanting to do things myself. Because I didn’t listen to my employees and be stubborn, ”Don Luis laments.

The entrepreneur recommends all people who have employees to boost the potential of the people who make up their team, because they are the ones who know what really happens day by day in the business.

Who knows? Perhaps listening to the ideas of your employees will lead you to have thousands of followers and to appear on a TIMES page.