This article was translated from our Spanish edition using AI technologies. Errors may exist due to this process.

This Tuesday, Bitcoin made its debut on the New York Stock Exchange (NYSE) as an ETF , after the United States Securities and Exchange Commission accepted the first exchange-traded BTC futures fund. This caused the cryptocurrency to reach its historical record price above $ 64,000 again today and it continues to rise!

The ProShares Bitcoin Strategy ETF began trading this Tuesday, October 19 under the BITO label. These are Bitcoin futures contracts backed by the CME Group and do not involve the direct purchase of the digital currency, as it is an asset that is not yet regulated.

To better understand, an ETF is an Exchange Traded Fund , or a listed investment fund . They are securities that track an asset and can be bought or sold on the stock market. Thus, the bitcoin futures ETF would work like any ETF, but it would be linked to the variations in the price of the cryptocurrency: if the Bitcoin goes up, so will the ETF and if it goes down, too.

ProShares rings the bell, launching the first US #bitcoin futures ETF $ BITO on the @NYSE . pic.twitter.com/A8DPLO30gZ

This opens the door to invest in Bitcoin without actually buying the cryptocurrency.

“BITO will open bitcoin to investors who act through a broker or are comfortable buying stocks and ETFs, but do not want to have a relationship with a cryptocurrency provider and create a bitcoin wallet or are concerned that these providers are unregulated and subject to to security risks, ” said Michael L. Sapir, CEO of ProShares, in a statement.

The mere news of the entry of Bitcoin to the New York Stock Exchange caused its price to begin to rise and since then it has been unstoppable.

At the end of September, Bitcoin was hovering around $ 40,600 per unit. Then, in early October, it spiked to $ 55,000 thanks to billionaire George Soros , and yesterday, it broke the $ 60,000 barrier. During the trading session today, Tuesday, Bitcoin increased almost 4% more, in just six hours!

This would add up to a rise of 58% in the last month and, at the close of this note, the trend continues to rise. 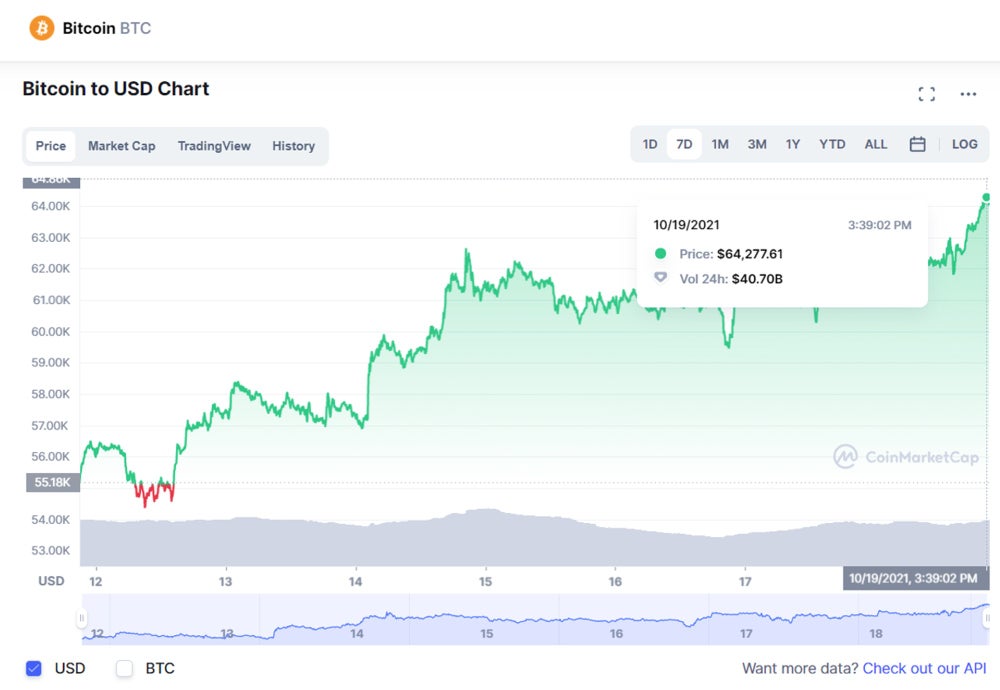 The entry of Bitcoin to the stock market is a historic step for both the cryptocurrency and the ETF industry, as it involves the validation of digital currencies by the US financial authority and the stock exchanges.

On Friday, the Nasdaq Tech Index approved the listing of the Valkyrie Bitcoin Strategy ETF, as Grayscale, the largest digital currency manager, plans to turn its flagship product into a spot Bitcoin ETF, CNBC reported.